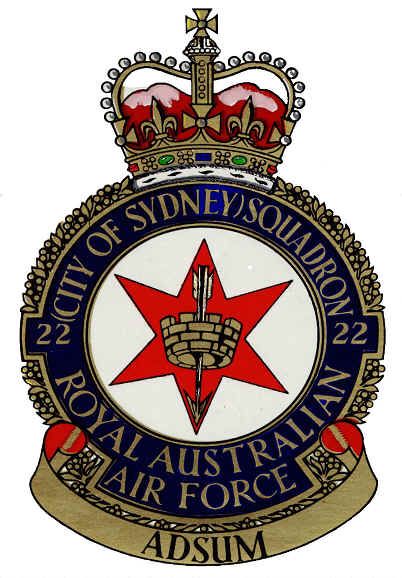 We welcome you to No22 (City of Sydney) Squadron Association Web site.

This is the Web site of No22 (City of Sydney) Squadron Association. It Supports both the serving and former members of the squadron. The Squadron is based at RAAF Base Richmond NSW. The Squadron was formed 20 April 1936 from A and C Flights of No3 Squadron RAAF. It fought in the South pacific campaign in World War 2 and has a proud record.

(This site uses .pdf files. If you are unable to open such a file please visit www.adobe.com and download a reader free.)

Note: There are links to the Australian War memorial Web site imbedded in this article

22 Squadron’s first assignments of the Second World War were as a training unit covering army support and towing targets for anti-aircraft practice. In 1941 the unit was equipped with Anson and Wirraway aircraft and flew seaward patrols along the eastern seaboard. By November 1942 the unit had moved to Port Moresby in New Guinea and was equipped with Boston light bombers and Beaufighters. The squadron attacked enemy targets and shipping in the Buna–Gona area. During an attack on the foreshores of Salamaua, Flight Lieutenant W.E. Newton and his crew were shot down and forced to land at sea. Newton and Flight Sergeant Lyon swam ashore only to be captured by waiting Japanese troops. They were both killed on 29 March 1943. Newton received a posthumous award of the Victoria Cross for his attacks on Japanese positions, making him one of only two awarded to RAAF Squadron members.

In August 1943, the squadron moved to Goodenough Island and continued to search for Japanese barges and vessels used in increasing numbers to supply troops in New Guinea. The unit moved briefly to Noemfoor airfield in August 1944 and bombed targets on Ambon Island and Suli village in preparation for the Allied attacks on Sansapor and Morotai before relocating to Morotai to assist in the attacks on Japanese targets in the Celebes and the Philippines.

Japanese defences and counter-attacks left the squadron with so few serviceable aircraft that it was forced to move to Noemfoor to rearm for operations with Beaufighters under the control of 1st Tactical Air Force. Aircraft used rockets to destroy radio and radar stations, supply dumps, and attack troop concentrations and enemy shipping.

The unit moved, yet again, to the Southern Philippines to support attacks on Tarakan and also Australian landings at Labuan and Brunei Bay. In June 1945 22 Squadron returned to Moratai until the end of the war, when it moved to Deniliquin in New South Wales before being disbanded on 15 August 1946.